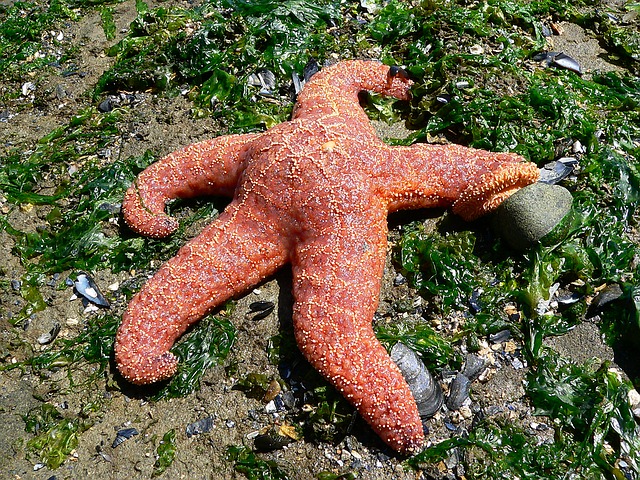 Visit the tidepools along the Central Coast

From Piedras Blancas to Montana de Oro the rocky outcroppings of the Central Coast offer us a glimpse into the marvelous wilderness of the underwater world.

It starts with the rise and fall of the tides. Twice a day, pounding surf surges in and beats against the rocky shoreline, whipping up an agitated froth. Six hours later the waters retreat leaving the area exposed and life within it on hold until the sea returns.

In a tidepool at Corallina Cove in Montana de Oro deep pockets in the rock layers hold pools of water filled with colorful life. Ochre Sea Stars, some orange and some purple, stand out against the deep green sea lettuce. Small black and brown turban snails pepper the pools.

Where to see tidepools

Some of these shells actually contain hermit crabs that scurry around hunting for food. Green anemones wave their tentacles trying to capture minute organisms to drag into the depths of their bodies.

A pretty rose-colored scale called coralline algae covers most of the rocks underwater and lends the cove its name. Harbor seals haul out and rest on the exposed rocky ledges. Closer to the breaking waves are sea urchins, and more crabs and sea stars.

There are several tidal zones beginning with the splash zone, which receives the blast of the waves at high tide and proceeding through the high tide, mid-tide, and low tide zones.

Each of these sections has its own creatures and plant life that manages to exist in both the turbulent water and when high and dry.

The high tide zone remains moister than the splash zone and here you will see barnacles, mussels, rock crabs, anemones, and chitons. The mid-tide zone is uncovered at normal low tide levels. Small fishes, shrimp, sea stars, hermit crabs and nudibranchs live in this environment. Of these the shell-less snail, the nudibranch, is probably the most colorful, often having flowing plumes on their backs.

Gazing into these many small ponds at low tide you will be privileged to see a miniature realm in complete detail. If you go tide pooling, please leave the areas as you found them. Replace rocks and creatures exactly as they were and handle everything gently. Wear non-skid shoes capable of getting wet and a walking stick for support. The Central Coast Natural History Association offers docent walks at many of the above locations. Call (805) 772-2694 for information.

In northern San Luis Obispo County along Highway 1, the beaches near San Simeon are studded with small sand dunes and shallow tidepools bursting with life. Search out the two species of kelp – a type of seaweed found in California – that protect shallow water species and feed numerous tide pool dwellers. Sea lions and sea otters are frequently spotted nearby and a giant elephant seal breeding haulout site is not to be missed. Visitors can also explore a variety of natural and historic sites nearby, including Piedras Blancas lighthouse, San Simeon State Beach, and Hearst Castle.

Head over to the boardwalk that runs along Moonstone Beach and look for stairs and paths down to the rocky shoreline. On the beach, you will find several tide pools. They are filled with ocean life like sea anemones, spiny purple sea urchins, snails, and crabs.

Just a little south of Morro Bay is Montaña de Oro State Park in Los Osos. It’s 7,828 acres include rugged cliffs, secluded sandy beaches, coastal plains, and year-round streams in wooded canyons. The park gets its name Mountain of Gold from its profusion of wildflowers in spring; then, you’ll find carpets of fiddleneck and California poppy on the slopes that sweep back from the sea, and California buttercups decorating the mountainsides. Explore the sand dunes and tide pools on your own or with one of the state park volunteers. The coves and tide pools of the park are places to see dolphins, sea lions, and oystercatchers.