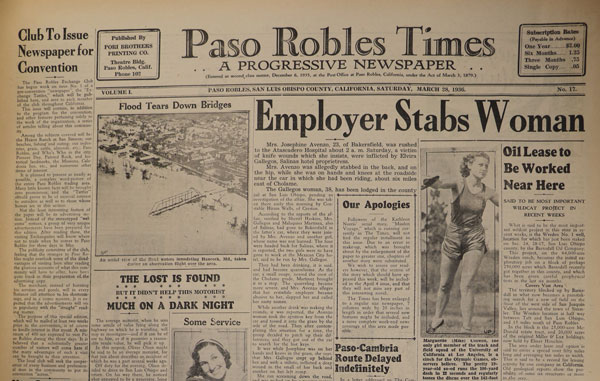 In a letter addressed to The Cambrian, and published in that paper this week, Earl Lee Kelly, director of the California State Highway Commission, indicates that there is no immediate prospect for a modern roadway being built to connect Paso Robles with the coast town.

Mr. Kelly’s letter was in reply to a communication which had been addressed to him earlier this month, and which in a friendly way, called his attention to statements which he assertedly made during a meeting in Paso Robles in 1934, to the effect that a survey of the proposed state highway project would be made.

His answer reads in part: “When this matter was first presented to the California Highway Commission they authorized a Feedback reconnaissance survey because it required some $30,000 for an instrumental survey on this stretch of road . . . The survey . . .made in July (1934) . . . And (the report) is now in the files of the commission.

“But perhaps the survey proved to be the undoing of the project for construction, for it revealed that it would be decidedly expensive to build this road to the standards which . . . (were necessary) . . . In fact considerably more than the small volume of traffic on the road would justify . . . “

In further explanation of the Commission’s stand, Mr. Kelly recalled the fact that available funds have been reduced about $12,000,000 per biennium because of a halfl-cent gas tax allocation to cities. There are several other projects of major importance, which must be completed if possible during the current biennium, he said, and that if the Paso Robles-Cambria road improvement were to be undertaken, these would necessarily be delayed.

This “Looking Back” view at Paso Robles history comes from one of the hundreds of local newspapers in the Paso Robles Area Historical Society collection. Several local newspapers, dating from the 1800s, have reported on local, national and world events, providing priceless historical views of our community that are not available from any other source. The Historical Society is seeking community support for the multi-phased Newspaper Preservation Project to help fund the transfer of these aged and fragile pages to microfilm and digital images. See the society website for more information about becoming a member or donating to any phase of this project.

The Paso Robles Daily News is pleased to support this important project. Watch this space for future “Looking Back” articles.